This educational design assignment involved making an urban plan for a large area in Delft called Delft instruments en Zuidgebied. It used to be industrial area but now it’s just empty terrain. Most of the buildings were demolished and it’s been used as the place where all the sand goes that emerges from the ever growing tunnel thats beaing created for the new plan for the spoorzone Delft. So it was up to us to come up with new ideas to realize this area.

Urbanism has been declared dead by Rem Koolhaas and according to several sources so is the era of large scale urban planning (read for instance ‘The Spontaneous City’ by Gert Urhan). With this perspective I started working on this case. So instead of trying to come up with something definitive and large scale, I tried to work out a plan that was flexible as well as something that could be built in phases. The outcome is a simple grid structure. A structure that can be filled with initiatives coming from everywhere. The aim was to make website were individuals, groups of people or developers can apply for one or a number of plots. Once enough people are found for one block or ensemble this block is executed. This is the case with most of the blocks. Therefore, and because of the unpredictability of the future in these, lets say, unsure times, we gave every block a flexible and collective inner space. So no matter what happens next door, at least we’ve created value for this block. That way the blocks are futureproof.

Of course we still have to think about the bigger picture, the danger of this small scale, intiative rich, bottum up method where people are free to do as they like is the fragmentation. It could be utter chaos! So we thought about the bigger lines. We made seperate sections and appearances for five seperate types of streets (a good book on this topic: straten maken). We designated certain area’s to feature more stores and others to be more focused on families and students for instance. The way this works out on the small scale has to do with the sizes and facilities of the different plots. Trough those we stimulate the attraction for a specific target group, such as devolopers of stores or starters. This is needed to give the trust that developers want. They need to know that people are going to go to certain area to buy stuf, so they need to know that there will be for instance more stores, so the area will attract people. That’s the urban plan in a nutshell.

We also had to think about the block level, or ensemble and an individual building. I designed a closed block that has a collective garden but is intersected with a stream of water. This cuts open the block and exposes the collective gardes to the passerby. The block is a typical block as explained above. So it’s open for privately, collectively or developer commisioned design. They can take one plot or multiple. Through the affiliated site it’s made sure that there’s a good mix of functions. I designed a developer commisioned block with houses for starters and stores. The concept was to give starters, who are placed above the shops, that are one street level, typical real houses. To give them a real place for themselves instead of an appartement in a bigger building. So instead of stacking it up I designed two rows next to eachother. Ofcourse the sun could be quite a problem, so I shifted the rows half a building in respect to eachother and then exchanged some of the buildings for gardens for the adjacent houses. The other house all have a rooftop garden on their neighbors house. This gives everybody a garden on the south side.

Aerial view of the masterplan 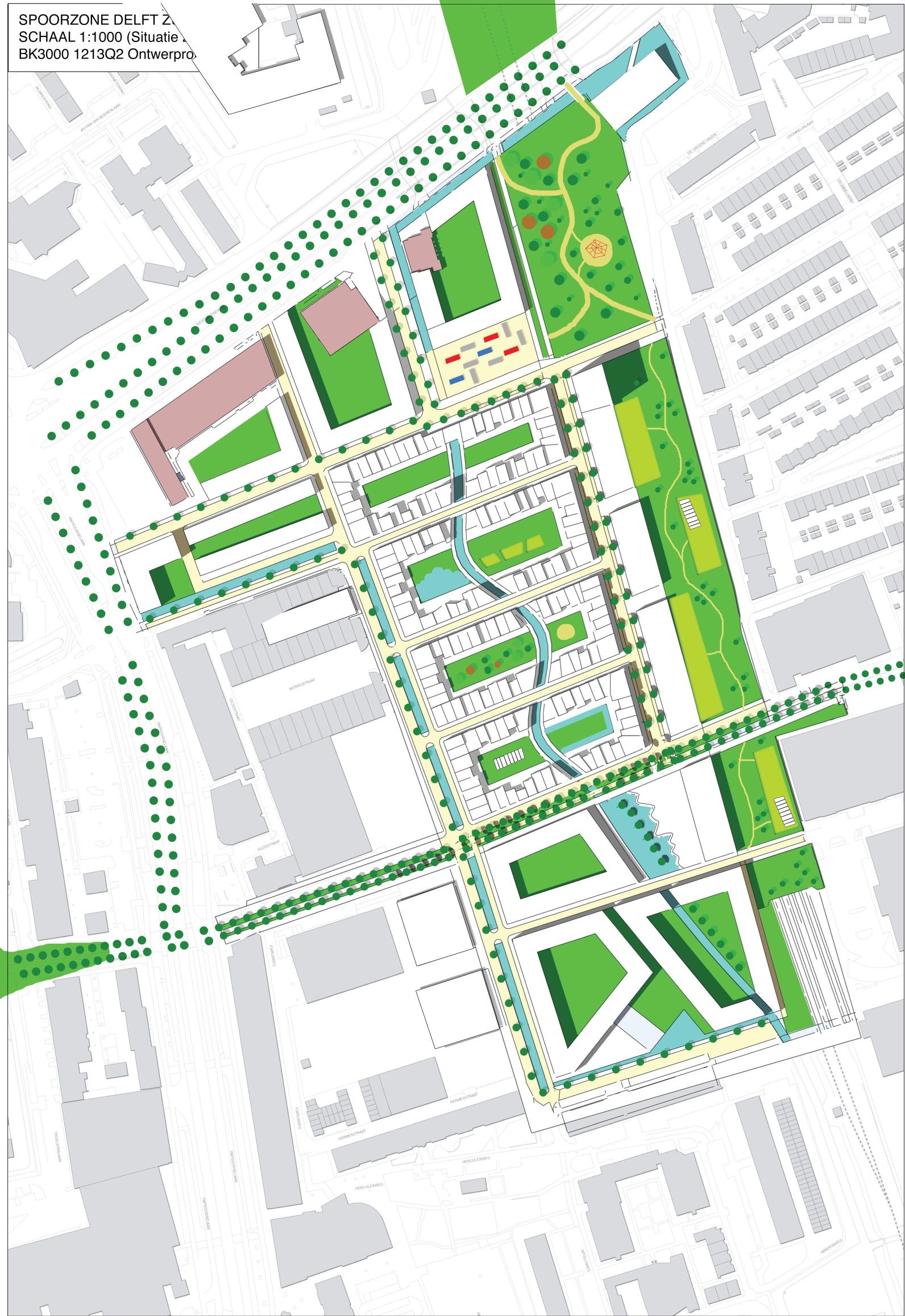 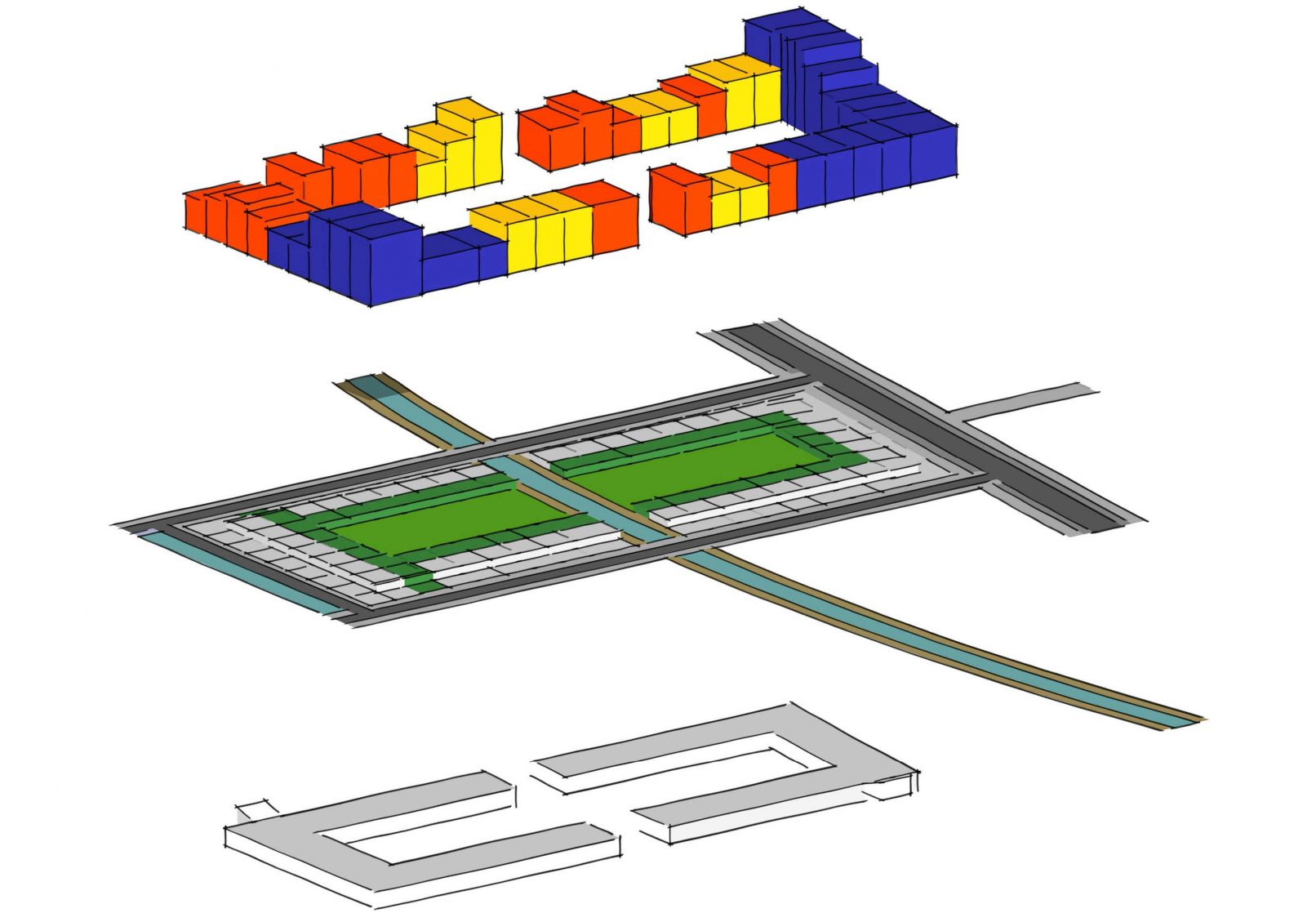 The concept for the blocks was to be a mix of different stakeholders, public and private, inhabitants, small shops and developers

a design for a housing block made by a developer

a eye height perspective of the building 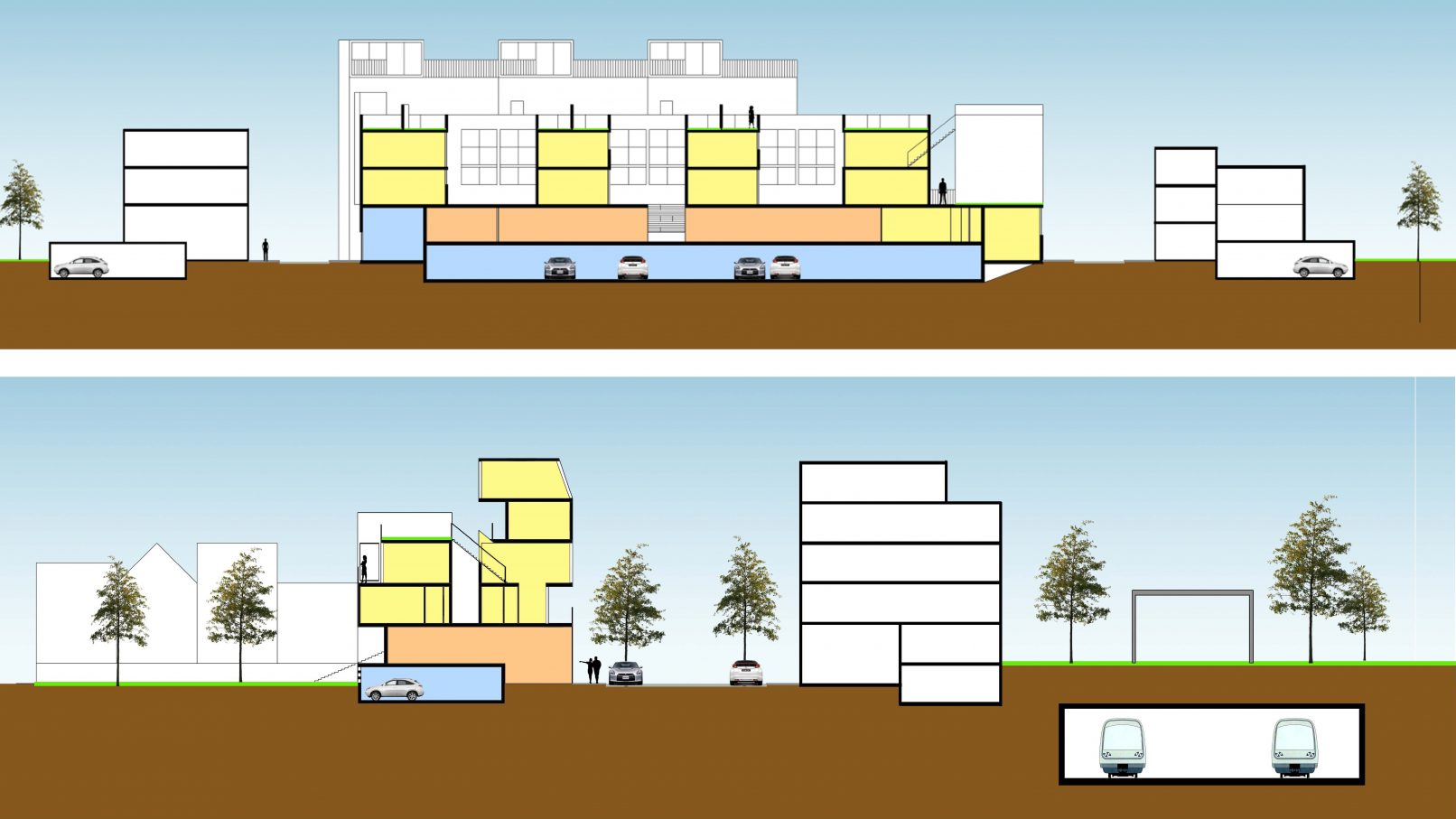 sections of the block, yellow is housing, orange is shops and restaurant space and blue is parking
Previous project
Next project